Local red lettuce is one of the many seasonal produce we sell in the store!

It’s local season at FreshDirect, which means we are directing all of our efforts to sourcing and promoting the freshest, best-tasting local produce for your eating pleasure.

From early May to mid-October, Eric Stone, our produce category manager, and I make frequent trips to the North Fork of Long Island, the Hudson Valley and south central New Jersey to check in on the crops’ progress and visit with our farmers. We take pride in our relationship with our farmers and work very closely with them to ensure that we receive the cream of the crop, and in return we offer fair prices and visibility for their fresh products.

There are a few new and exciting things happening in the local department this year! For starters, we’ve sourced a number of our commodity items from New Jersey under the Jersey Fresh umbrella. Produce from New Jersey does not receive the Jersey Fresh stamp of approval unless it meets the “quality standard for the size, shape and coloring of that commodity.” Be sure to check out McGregor’s Microgreens micro arugula and Cassaday Farms strawberries, both great examples of vendors that exemplify Jersey Fresh quality standards….

END_OF_DOCUMENT_TOKEN_TO_BE_REPLACED Our seafood experts, David and Jeff, were in Alaska late last week to check on (and catch!) this season’s wild Alaskan salmon from the Copper River. Copper River salmon are among the richest, tastiest fish in the world. And they can’t come any fresher—the fish that David and Jeff caught are in our stores right now!

David and I arrived in Cordova, a small fishing village near the mouth of the Copper River in Alaska.  The charming town is on an inlet surrounded by majestic mountains. There are no more than a couple thousand people, a harbor full of fishing boats, and a number of docks and processing plants….

END_OF_DOCUMENT_TOKEN_TO_BE_REPLACED FreshDirect Expands Service to The Bronx

Online Grocer Set To Start Accepting Orders From All Bronx Zip Codes; Deliveries To Start On May 21

NEW YORK – FreshDirect today announced that it is now accepting delivery orders from every zip code in the Bronx, expanding access to fresh, healthy groceries. Actual deliveries to the new zip codes will start being made on May 21.  As part of FreshDirect’s service expansion, the company will promote a Bronx grand opening sale with discounts on popular items of up to 50 percent plus new customer discounts of $25 all for Bronx residents – available now at www.freshdirect.com.

Earlier this year, FreshDirect partnered with Governor Cuomo, Mayor Bloomberg, and Borough President Diaz to announce that the leading fresh food Internet grocer will invest $112.6 million to build its new headquarters at Harlem River Yard.  The move will create 1,000 new jobs to support our continued growth over time and will retain 2,000 existing jobs. In addition, the actual construction of the new headquarters will create approximately 684 construction jobs.

END_OF_DOCUMENT_TOKEN_TO_BE_REPLACED We’re back delivering to the Hamptons and Memorial Day is coming up, kicking off the start of summer. That means our favorite time of year is back: cocktail hour with friends and drinks by the pool (or, in my case, drinks on a Brooklyn roof while imagining drinks by the pool). Experimenting with cocktail recipes is the most fun you can have with a blender, and the best part is: they’re almost impossible to mess up. Seasonal fruit, juice, and quality wine—where can you go wrong?

So in anticipation of the season, I ordered our freshest fruits and my favorite wines, invited a friend with discerning tastes (just kidding, he’ll drink anything), and started mixing things up in the kitchen!

I’m not really one to follow recipes closely—which I think stems from a problem with authority, even in the form of recipe directions—so I added basic drinks to our One-Click Recipe section and new Facebook Recipe Finder. That way you can get some ideas while substituting your fruit and alcohol faves….

END_OF_DOCUMENT_TOKEN_TO_BE_REPLACED While there is plenty of curiosity about going gluten-free, there is just as much misinformation. Wondering if a gluten-free diet is for you? Let’s find out together: Come with me as I take a healthy look at gluten-free eating, including exciting news about our improved Gluten-Free Store! I’ll be your guide, pointing out highlights and pitfalls along the path.

Prepping the Path (a bit of background)

Gluten is a protein found in wheat, rye, and barley and their derivatives. Some people, such as those with celiac disease, have an immune reaction to gluten that damages their small intestine and limits nutrient absorption.  For more gluten-free facts, check out our FAQ section here….

END_OF_DOCUMENT_TOKEN_TO_BE_REPLACED Mother’s Day is a time to give back to the ladies in our lives and I think the gift of a finely prepared cocktail is welcome at most homes.

We bookend the occasion with easy-to-make cocktails designed for the aperitif course and dessert course.  The Cherry Jussara welcomes Spring time notions of açai berry, cherry, and citrus for  a lovely start to the afternoon.

A decadent ending to dinner comes in the form of Nonna’s Coffee, a dessert martini of amaro, coffee liqueur, and whole milk….

END_OF_DOCUMENT_TOKEN_TO_BE_REPLACED 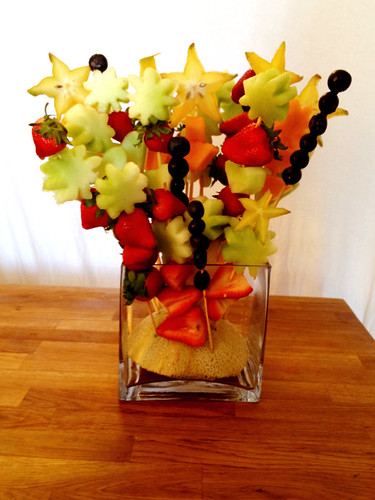 “Eat your fruits and vegetables.”  Growing up, I think everyone has heard his or her mother utter those words.

So for Mother’s Day, instead of flowers, wouldn’t it be fun to make a fruit or vegetable bouquet for Mom?

So roll up your sleeves, grab Mom’s favorite fruits, and get some helpers to put together these beautiful and delicious bouquets!

END_OF_DOCUMENT_TOKEN_TO_BE_REPLACED What do you do with your FreshDirect boxes?

From the photos you’ve tweeted, posted on Facebook, and emailed to us, it’s clear to us that we have the most talented fans around!  (Take a look – We posted many of them on our Pinterest board here.)

So we thought: Our creative fans should be rewarded! And what better way to celebrate the launch of our new Baby Boutique than with a Family Fun Photo Contest?

All you have to do to enter is snap a picture of how you and your kids re-purposed your FreshDirect boxes and fill out the entry form here.

What could you win? Up to $2000 in prizes is up for grabs including ten $100 FreshDirect e-gift cards and products from our new Baby Boutique. Start your day right to keep yourself energized!

Calling all mothers: Thank you for all that you do! You always have a lot on your plate – after all, you have the toughest job in the world! You’re so busy taking care of everyone else, we want to make sure you take care of yourself too!

Tired of being tired? Ready to reach beyond the coffeepot for some real, life-changing, energy-boosting habits that will keep you going strong for the long run? Spoiler alert: these tips aren’t new, and they aren’t shortcuts, but they do work! As an added bonus, I’ve put together a sample 1-day meal plan for you, too.

Staying energized is as simple as: Eat. Drink. Move. Sleep….

END_OF_DOCUMENT_TOKEN_TO_BE_REPLACED The mini sizes are great in lunch boxes, as an after-school treat, or as a moderate way to have a sweet fix after dinner without going overboard.

They also make party planning easy—get a pack of blondies, some double chocolate chunk cookies and assorted macaroons and make your own little party platter. (We also have our own mini platter coming soon—for the nights when you don’t have time to do it yourself.)

If you’re entertaining kids or a crowd with a sweet tooth, here are 3 fun mini dessert ideas:…