Try something different with your burger this Labor Day weekend.

END_OF_DOCUMENT_TOKEN_TO_BE_REPLACED

Move over, tomato and onion! There are new toppings in town.

END_OF_DOCUMENT_TOKEN_TO_BE_REPLACED

Don’t be intimated by something new! Making this spicy venison burger recipe, courtesy of our partners at Silver Fern Farms, is just as easy as crafting your favorite beef patty.

END_OF_DOCUMENT_TOKEN_TO_BE_REPLACED

Brioche buns are great, but it’s time to bid adieu to bread and say hello to three new ways to hug your burger.

END_OF_DOCUMENT_TOKEN_TO_BE_REPLACED 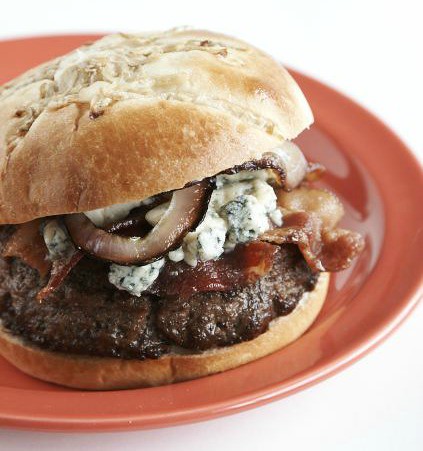 When I visit my family in Upstate, NY, I love when my dad fires up the grill and makes my favorites.

There’s his famous lemon steak (extra-thin slices of steak marinated in lots of lemon juice and oregano, and charred perfectly on the grill), and on my most recent visit, I had my perfect burger—a soft bun, gooey cheese, a juicy beef patty, ketchup, and mayo.

Back at my apartment in Brooklyn, I used a grill pan to replicate the burger, but since I can’t get that same grill flavor, I tried different proteins and added fun toppings that remind me of home. Here are my burger creations in honor of Father’s Day:…

END_OF_DOCUMENT_TOKEN_TO_BE_REPLACED I remember growing up there were several summers where my dad would grill burgers by the pool.

My brother and I would race to see who would pick toppings first. I’d toss to Dad some cheese (yellow American) so he could melt mine right on the burger itself, then I’d assemble the rest of the toppings on the bun.

My brother didn’t care – he was off building a mountain of goodies, complete with stacks of onions, tomato, lettuce and mustard, which he used to refer to as “the glue,” between each layer.

Ahh, memory lane. As we head full swing into summer, I thought I’d ask some colleagues at FreshDirect what toppings they like on their burgers. Sure enough, whenever I stopped to ask one person, others perked up. Apparently, toppings are a topic of interest.

Here are some office favorites:…

END_OF_DOCUMENT_TOKEN_TO_BE_REPLACED 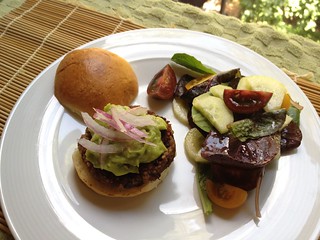 Want the satisfaction of a burger without throwing away your health or your waistline? Love saving time in the kitchen? Well, you’re in luck! I spent last weekend coming up with two fantastic burgers that are both quick to make and healthy for you too.

The first is a better-for-you beef burger (for those of you who agree that a burger means beef). And for the adventurous types, the second is a lovely vegan quinoa-black bean burger spiked with apple cider vinegar (trust me, it does something nice with the earthy base notes), prepped in the pan with heart-healthy walnut oil. What makes them health-smart? Sane portion sizes, fewer calories, and more whole grains and veggies! Each burger was prepped and plated in well under 30 minutes….

END_OF_DOCUMENT_TOKEN_TO_BE_REPLACED

Where do you find the richest, juiciest, meatiest burgers in New York City?

Those in the know seek out Pat LaFrieda & Son, where they’ve been cutting and grinding top-quality meats for more than 90 years.

We wanted burger tips from the best in the business, so we tracked down Pat LaFrieda himself to learn about his approach….

END_OF_DOCUMENT_TOKEN_TO_BE_REPLACED

Slider Burgers with Pickles and Cheese

To kick off the party, we’ve selected five tantalizing recipe options from our One-Click Recipes section.

Though the word “burger” typically conjures a vision of beef patties sizzling on a grill or in a skillet, there are nearly endless possibilities for what goes between the buns.

From tuna burgers and lamb patties to burgers topped with blue cheese and pineapple relish, these five recipe selections show off a few inventive twists on the classic cookout favorite….